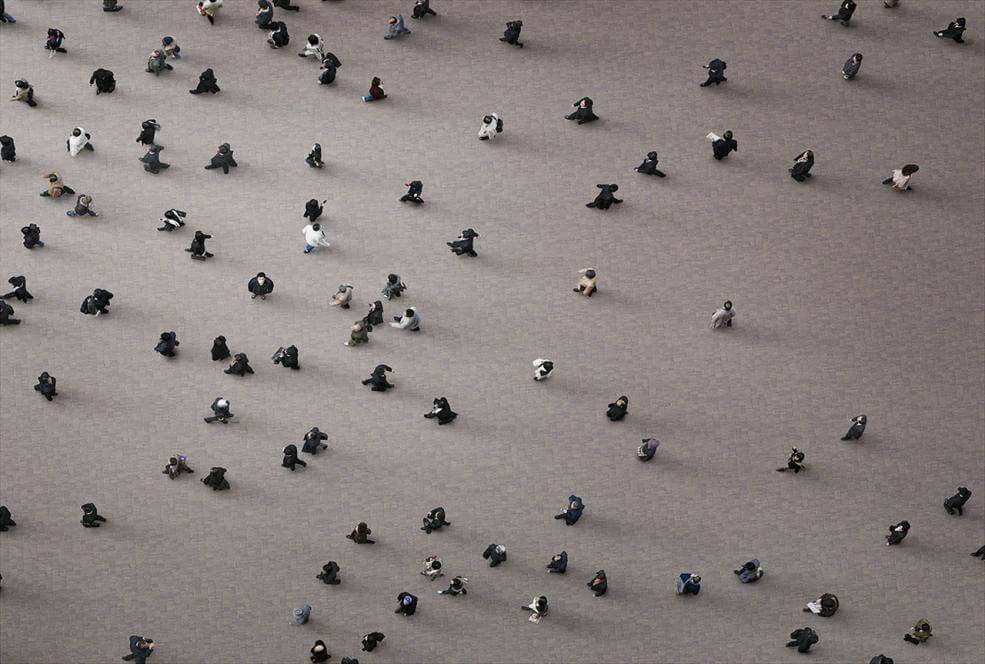 Adam Magyar (born 1972) is a Berlin-based Hungarian photographer and video artist captivated by high-tech cities. His work depicts life in the urban environment and his process is a symbiosis between technology and creative instinct. He is fascinated by the flow of time in the endless stream of lives in the world’s biggest mega-cities, and his work depicts his dream of capturing the different parts of a person or of a group of people at different times, in one single image.

In his series Squares, Magyar tackles themes of surveillance, identity and constructed spaces. He collects aerial views of commuters on sidewalks, meticulously isolates each figure, then composes each arrangement over a synthesized ground to create an artificial urban scene realized entirely on his computer. In Urban Flow, he uses homemade slit scan technology and self developed computer programs to photograph the endless stream of pedestrian traffic in the busiest intersections in the world. People move as if predestined, walking towards a common destination, like beads on a horizontal string. In Stainless, his photos reveal an uncanny similarity in the behavior of solemn commuters in the subway systems of famous urban hubs, such as Tokyo, Paris and New York. With each of his series, he observes time flowing by and life pulsating in front of his eyes, and he scrutinizes the transience of life and man’s inherent urge to leave some trace behind, adopting and reinventing contemporary devices like industrial machine-vision cameras to be able to produce his unique cityscapes.