Taking aesthetic cues from film, fashion photography, pulp fiction, and her native city of Los Angeles, Alex Prager produces Technicolor photographs with dark, unsettling undercurrents. “I find my inspiration in the city of Los Angeles,” she explains. “It’s a strange picture of perfection—but there is an eerie monotony that creeps in. It can slowly drive a person crazy, that sense of unease under the surface of all this beauty and promise.” Populated by seductively stylized women, Prager’s photographs resemble vintage Hollywood movie stills. She constructs ambiguous scenes weighted with the uneasy expectation of impending danger. References to the films of Alfred Hitchcock and David Lynch and the photographs of Cindy Sherman and Gregory Crewdson abound in her work.

La Petite Mort reflects an evolution in Prager’s practice. For Prager, photography is integral to her work process, and every series is informed by a basic emotion the artist wants to evoke. This short film links the potentially sublime experiences of sex and death, advancing Prager’s fascination with emotional experience.

La Petite Mort is a short, surreal portrayal of a woman’s overwhelming bodily transcendence by way of death and love (the title of the video is also a French term for orgasm, “the little death”).

The lush video’s narrative begins with narration describing a mother’s ecstasy in labor, abruptly cutting to a speeding train headed straight toward a woman, her eyes fluttering in anticipation of the impact. The crash sends her flying backward into a pond, where she indulgently swims until surfacing to face a judgmental crowd. Lambasted by each character’s glare, she eventually reaches her “love interest” standing behind the crowd alone. She collapses to the ground as the crowd disappears and the train conductor rushes to her limp body.

The video concludes with this narration:

It has been said that the act of dying and the act of transcendent love are two experiences cut from the same cloth—the former a grand exit, the latter a slow escape. Indeed, many of the world’s greatest poets have long considered a passionate interlude as man’s closest moment to seeing god.

Sources: Artsy, National Museum of Women in the Arts 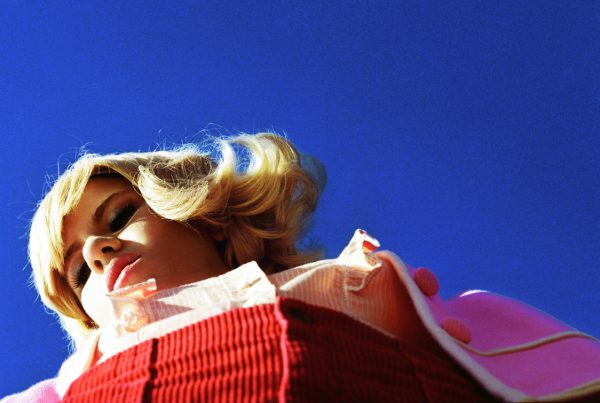