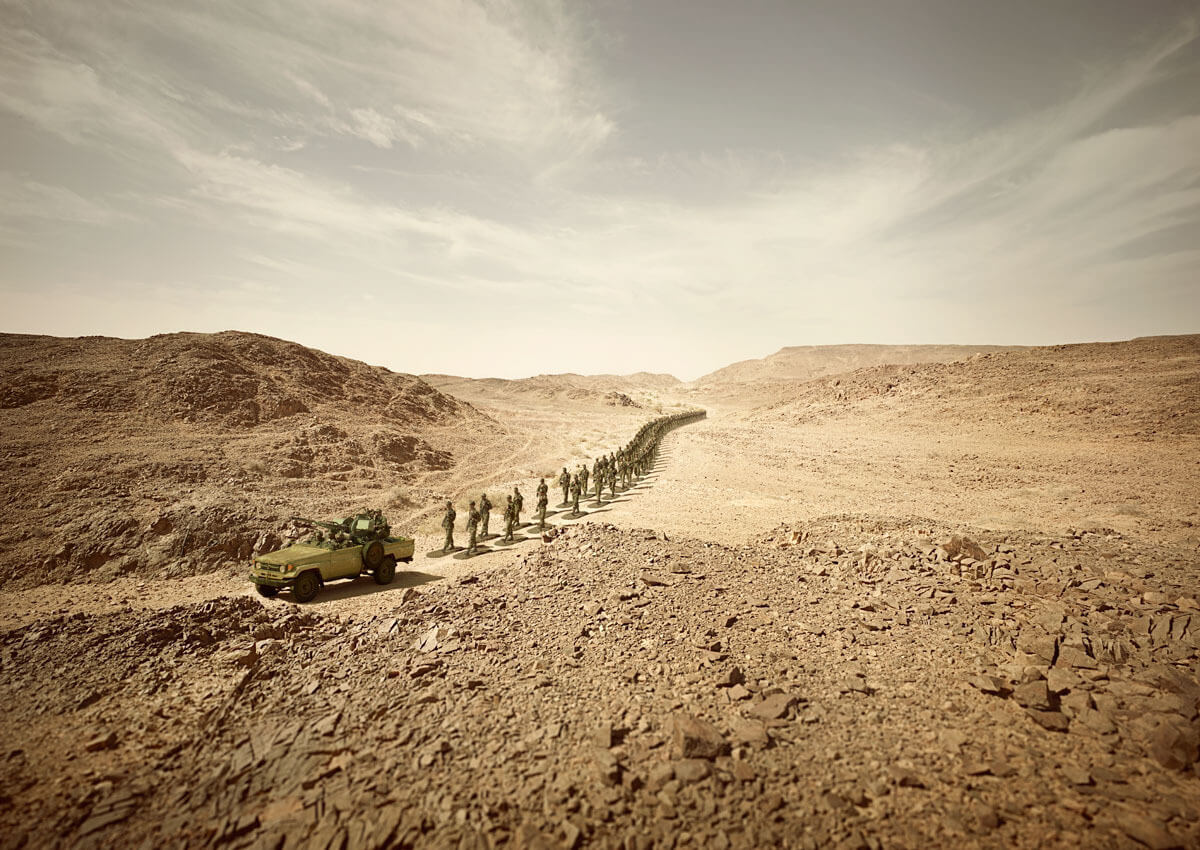 SIMON BRANN THORPE’S images are strange and startling. The photographer takes real soldiers and poses them as plastic army men in the desert of Western Sahara. Toy Soldiers is a unique look at a conflicted region, and acts as a metaphor for the desensitized way people sometimes consume war coverage.

[My goal is] to visually arrest a viewer via the blurring of boundaries between what is real and what is not,” Thorpe writes. “To inspire engagement through a fresh approach to the depictions of conflict that we [the audience] have become so numb to.

Toy Soldiers is an allegory of modern warfare, it’s narrative investigates the impact and psychological consequences of the invisibility and the de-humanising effects of war. Exploring the paradigm of colonial conflict through our cultural notions of freedom, nationhood and entertainment, Toy Soldiers attempts to create a dialogue via the viewing of modern conflict as war games seen through the conflict in Western Sahara, know as ‘Africa’s last colony’.

Toy Soldiers investigates the impact and psychological consequences of non-resolution and containment on the real soldiers -posed as toy soldiers- born from a historic cycle of colonial conflict, invisibility and the de-humanising effects of war. Exploring the paradigm of conflict through our cultural notions of freedom, nationhood and entertainment, Toy Soldiers attempts to create a dialogue via the viewing of modern conflict as war games in Western Sahara known as ‘Africa’s last colony’, where freedom and nationhood exist suspended as a concept.

The act of posing real soldiers as toy soldiers draws on several narratives both historical and contemporary. Via the direct reference to controversial and culturally iconic imagery such as Robert Capa’s Falling Soldier and Joe Rosenthal’s Flag Raising on Iwo Jima and their projection onto the unfamiliar, the project asks questions on the issues of power and propaganda. Drawing from the works of current artists such as An-My Lé and John Gerrard with influences by past masters such as Roger Fenton’s Crimean war documents and Mathew Brady, Toy Soldiers attempts to further blur the boundaries between the established genre of documentary photography and art.

Via a reality re-constructed, the performance of which, attempts to challenges our ideas of traditional war reportage in the search for new perspectives on conflict, and notions of truth in photography, through the formation of a the new archive on war.

At its heart Toy Soldiers Project is an allegory of war via a unique collaboration between an artist and a military commander. Toy Soldiers, a story of war, is shot entirely on location in the hauntingly isolated and beautiful territory known as Liberated Western Sahara in the disputed territory and ongoing conflict in Western Sahara. Through this little known conflict Toy Soldiers explores multiple complex aspects of our cultures relationship to the glorification of war, ubiquitous consumption of images of War and the relationship between the increasingly indistinguishable nature of real images of conflict and their fantasy portrayal as entertainment.