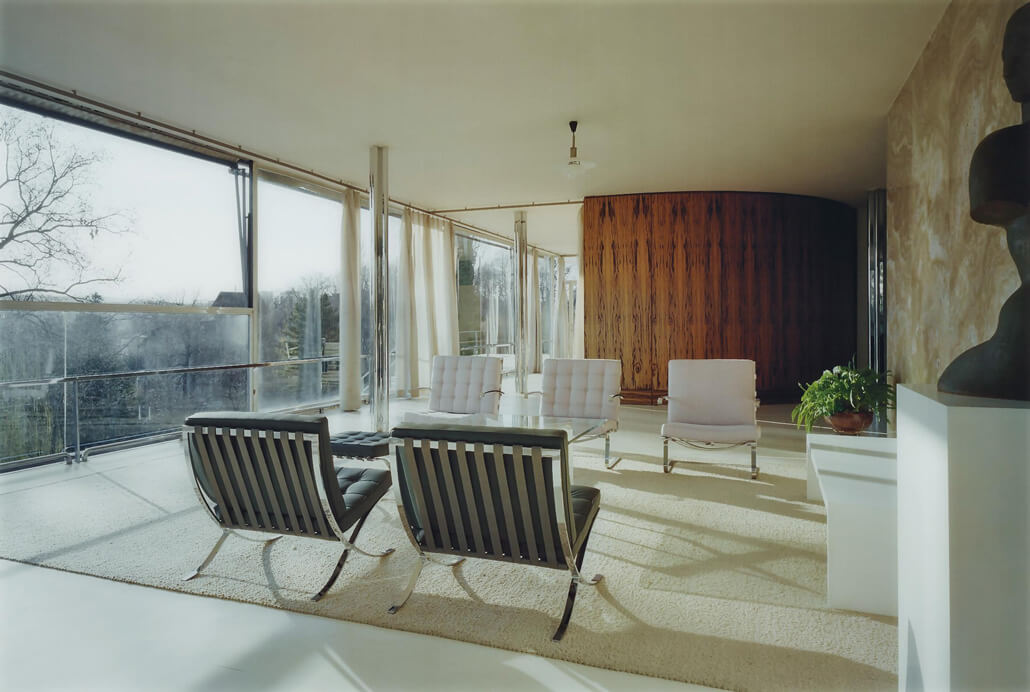 Thomas Ruff uses technological advancements to realize new visual possibilities of photography and question its artistic qualities. “I don’t believe in the psychologizing portrait photography that my colleagues do, trying to capture the character with a lot of light and shade,” he says. “That’s absolutely suspect to me. I can only show the surface. Whatever goes beyond that is more or less chance.” In the manner of the typologies and straight photography espoused by his teachers Bernd and Hilla Becher, Ruff’s best-known series is “Portraits” (1981-85), 60 frontal, identically framed photographs of expressionless men and women blown up to a monumental size.

The series l.m.v.d.r. – the initials of renowned 20th century modernist architect Ludwig Mies Van der Rohe (1886-1969) – began as a commission offered to Ruff in 1999-2000 in connection with the renovation of Haus Lange and Haus Esters in Krefeld, Germany. Having worked with architectural subject matter since the mid-1980s, Ruff was enlisted to photograph the Krefeld buildings as well as the Barcelona Pavilion and the Villa Tugendhat in Brno. Given the freedom to choose how the buildings would be rendered, Ruff was faced with the challenge of discovering a new way to capture these all-too-familiar and heavily documented monuments.

In the spirit of Van der Rohe, who emphasized “not the what but the how,” Ruff continues a conceptual line of how images are created. Fusing traditional elements with technological innovation, the photographs are both straight film and digitally-manipulated photography. Perception is of fundamental concern.

In the works of the Villa Tugendhat in Brno, Ruff photographed, for the first time, large-scale interiors, outfitted with the original Van der Rohe furniture. For many of the buildings, Ruff made a series of small interior photographs, a subject matter dating back to his earliest work at the Düsseldorf Künstakademie in the late 1970s, where he studied under the conceptual photographers Bernd & Hilla Becher.

By maneuvering camera angles and manipulating focus and color, Ruff heightens the role of the image with regard to present and historical sites. These works do not aim to record the physical reality of the buildings, but rather to embrace the spirit of innovation so particular to the creations of Mies Van der Rohe.