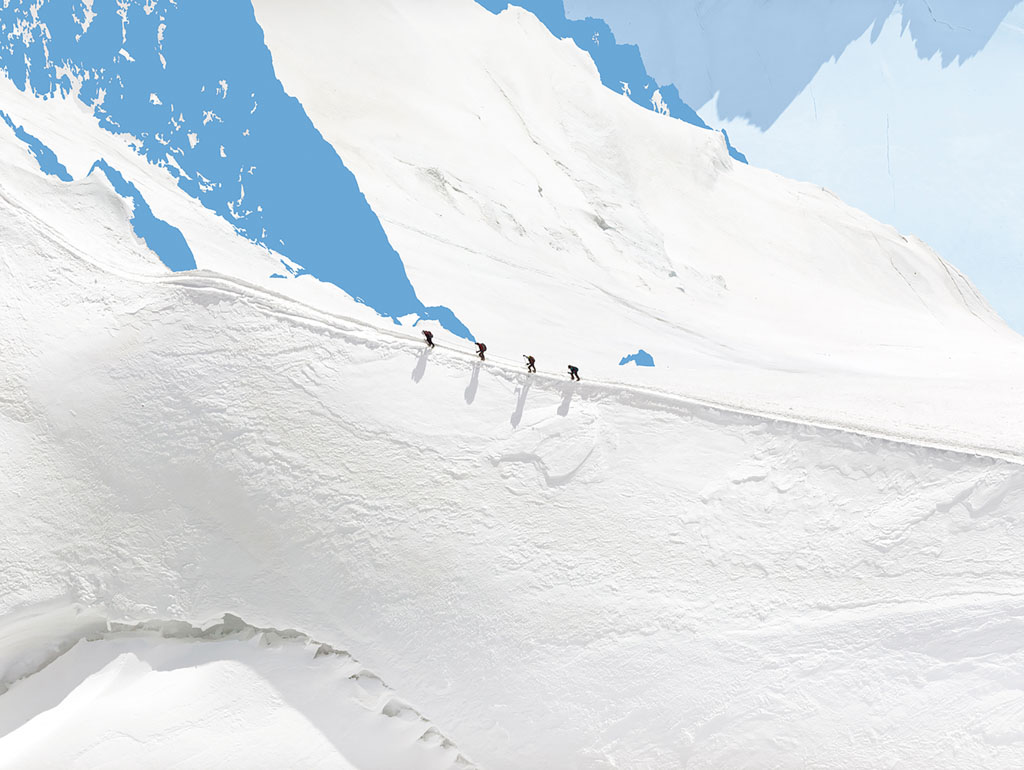 Having previously completed a series of aerial photographs in the Dolomites range in northern Italy, Barbieri has embarked on a project documenting the largest range in Europe, and the relationship that extreme climbers have to the terrain. As the artist describes:

The subject of ‘Alps – Geographies and People’ is how the mountain is perceived from the climbers’ point of view – its peaks and precipices, the mirages and hallucinations in its geography. In these images, everything is true. The proportions and the forms are real. Even the people and the position they’re in…those, too, are real.

The word Alps derives from the French and Latin “alpes”, which at one time was thought to derive from the Latin “albus” (white), in reference to the permanent snow on the peaks of the range. Employing a technique he calls “solid color”, Barbieri makes erasures and selectively whites out portions of the mountains, opening the possibility to define their fundamental forms in a concise way. Conceptually similar to the selected focus of his site specific_ series, which transformed the world into a model of itself, Barbieri here uses “solid color” to draw out the mountain’s basic, original form. Shot from a helicopter, the sublime and dizzying vantage is further enhanced by the inclusion of climbers traversing rocks and chasms, seeking to discover a hidden truth in what Barbieri describes as “blank maps”, a kind of spiritual space outside the realm of traceable geography. Whereas his previous Dolomites series revealed the terrain and included people as a near supplemental element denoting scale, Alps – Geographies and People moves the climbers to the fore, presenting their extreme and dangerous traverse as a near hallucinogenic journey of discovery among the most famous heights of Europe’s largest peaks.